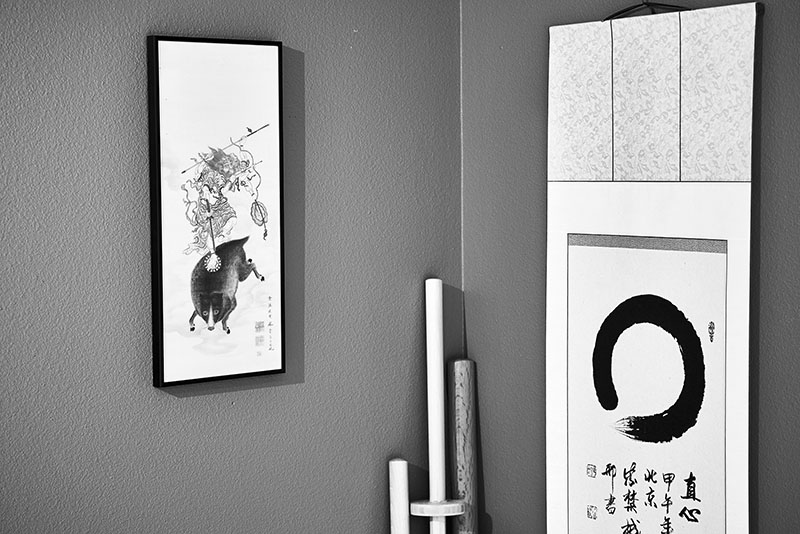 The Gassan-kan is a martial arts training activity focused on elements of Japanese swordsmanship. We maintain a practice derived from the classical tradition of Kashimashin-den Jiki Shinkage-ryu.

I was fortunate to learn portions of the curriculum of Jiki Shinkage-ryu at the Hobyokan dojo from David Hall, where I trained from 2008 to 2016. I received a chuden menjo in 2018. Dave Hall studied Jiki Shinkage-ryu under Namiki Yasushi (並木靖), 18th generation headmaster of the school, receiving the rank of jomokuroku and permission to teach in the United States in in order to further his own practice.

In coordination with Lonin, a martial arts cooperative focused on the practice of historical martial arts from around the world, I offer instruction in portions of the curriculum of Jiki Shinkage-ryu to a small group of people. I do so as an independent teacher, with incomplete knowledge, and knowing my skill level still needs to improve. I do not represent an official line of Jiki Shinkage ryu, but instead further my understanding of the art through continued practice.

I do this because of the benefit Jiki Shinkage-ryu provides to the body, mind, and spirit.

Because my perspective is somewhat unique, and my practice is focused on the understanding of the application of internal martial arts principles I have been fortunate to learn from Chinese internal practices, I use the name Gassan-kan Kenpo (月山館 剣法) to refer to this practice.

Jiki Shinkage-ryu is one of the most powerful forms of Japanese swordsmanship. It places emphasis on posture, breathing, focusing the mind and spirit (kiai), and developing a powerful cutting ability. It has a very austere character, with kata that are very strenuous to perform and develop a hard form of internal power.

Jiki Shinkage-ryu was founded by Matsumoto Bizen no Kami during the late 16th century and regards itself as the "true" or "correct" Shinkage-ryu. Jiki Shinkage-ryu contains a profound training regimen focused around the development of kiai (気合), which can be regarded as the active complement of aiki (合気) cultivated by other arts. Its fourth headmaster, Ogasawara Genshinsai Minamoto no Nagaharu (小笠原源 信斎源長冶, 1574–1644), spent 20 years in Beijing in the early 17th century, practicing Chinese martial arts, including the large and heavy kwan dao. Its 14th headmaster, Sakakibara Kenkichi (榊原鍵吉, 1830–1894), was bodyguard to the last Shogun and keeper of Edo castle.

Up until the late 19th century, Jiki Shinkage-ryu was a sogo-bujutsu, and included in addition to tachi and kodachi the practice of bo, naginata, yari, and yawara (grappling) in its curriculum. A focus on shinai sparring by Sakakibara, which increased the arts reputation and popularity, also led to eventual loss of those additional practices.

The word "jiki" means "correct" or "true". The emphasis on kiai and dominant spirit in Jiki are an outward (omote) manifestation of some of the essences of Shinkage-ryu. Because Shinkage-ryu grows out of a deep study of and critique of Shinto-ryu by its founder (Kamiizumi Ise No Kami), it is said to contain the gokui or essence of Shinto-ryu in its foundational kata, empi no tachi. Empi is a core part of Yagyu Shinkage-ryu as it was the first set taught by Kamiizumi to his students, with other kata were developed later to explain and elaborate on its principles. Empi is curiously absent in Jiki Shinkage-ryu's formalism; indeed, it may have been developed after Matsumoto Bizen no Kami studied under Kamiizumi. But, key elements of the practice can be found distributed throughout Jiki Shinkage-ryu, if you look hard enough.

Today, Jiki Shinkage-ryu has fewer techniques than other systems of kenjutsu, and I believe an exploration of both applications within the kata (called kuzushi) and free sparring (called tameshi ai) is essential to realize the full potential of its practice. In doing so, I draw upon my broader martial arts experience. Because we do not change the Jiki Shinkage-ryu kata we practice, but simply explore their application, we hope to still be able to practice with others over time, doing so in a manner that does justice to the art's long and rich history.

In that way, Jiki Shinkage-ryu as practiced at the Gassan-kan is a hard form of internal martial arts.

Information about our curriculum can be found here.