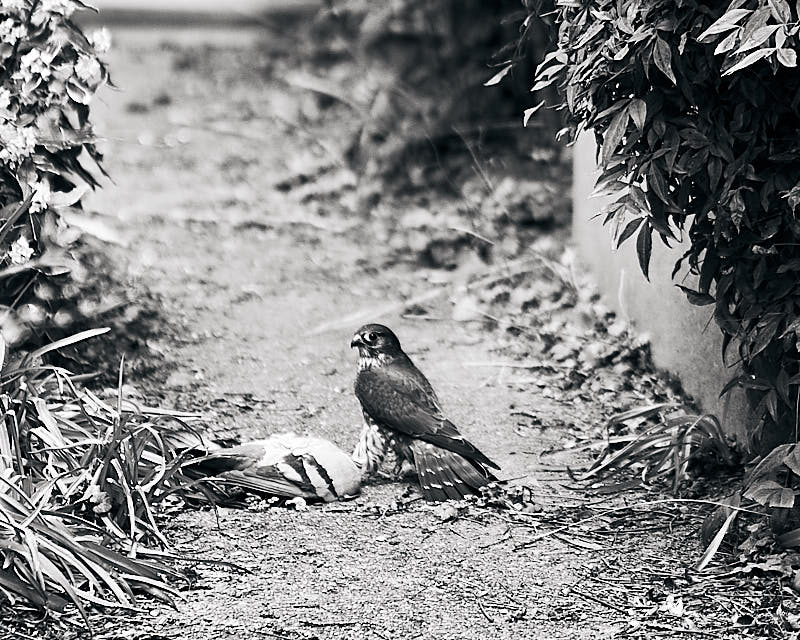 I was walking through the Phinney Ridge neighborhood of Seattle on a recent evening when I saw movement out of the corner of my eye. A small hawk had taken a pigeon as prey, and was standing immobile next to the larger bird. Somehow it was still there as I got my camera ready and managed to focus while the opportunity still presented itself.

In xingyiquan, half of the tactical forms of practice (i.e., the 12 animals) are named after birds of prey. In the Hebei xingquan, we practice cultivating the spirit and mental intent of each animal, as opposed to mimicing its external movements. This is in contrast to many other animal-inspired forms of Chinese boxing.

The hawk I saw (which may have been an example of accipiter striatus) was motionless yet alert, in a strong example as I have seen recently of remaining or steadfast mind.

When I returned to the same spot, having completed my errand, the hawk and its prey had vanished without a trace.

Opportunity can be as fleeting.

Traditional martial arts practices were developed during a period in history when outcomes mattered -- sword practice, for example, was a matter of life and death. Practitioners both had more time available for practice and motivation to make the most of their efforts. Regardless of the fact that our contemporary environment is different than that encountered in the past, it is arrogant to assume we can spend less time on training, and change styles or teachers while still developing our skill. Focus is required to receive the fruit of our labor -- often progress only occurs after a long period of effort and frustration. Training can be a profound struggle. There is a question of finding instruction from people who actually know what they are doing, which is hard enough in itself, as we are often not educated enough about the arts that capture our attention to know at the outset whether we are making a good training decision. I personally have spent years heading down winding alleys, whose corners yielded many surprises and delights, that ultimately gave way to impassible walls.

In some ways, only that experience allowed me later to make better decisions about my training, for example, in dedication to the arts practiced within North American Yin Cheng Gong Fa.

Even if by some chance a person happens across an art that preserves a high level of skill in a number of its practitioners, what of the prospective student? Do they have the basic conditions (fitness, mental attitude) needed to succeed? Can they spend the time required to develop a level of skill? Can they stay focused on the school long enough to succeed?

Listening to senior practitioners speak a bit about their students, both their pride and frustration often shows through. Strive to be the person they are proud of, and have little hesitation spending their time guiding further along the path. Daily practice and dedication is a prerequisite for taking full advantage of what journeymen instructors or great masters have to offer.

For me, as I begin to teach a bit more regularly, some of the same questions apply to the people I will spend time mentoring along their path. First, what I offer has to fit with their vision for their journey. Second, I have to think the time I will spend working with them will be meaningful for them, and provide me a mechanism to also further my own understanding and development. Because I am far from the top of the mountain, as far as skill is concerned.

To borrow a phrase from a great master, I do not want to waste anyone's time if the right conditions for training are not met. That doesn't help anyone. For my own sense of focus, and to honor the ideals I am attempting to cultivate, I will leave these essays in place, but will be spending my time training and considering longer formats with which to express my ideas.

I have not abandoned commentary, but please expect essays that are longer and more developed, less often. Meanwhile, consider the conditions that face your own development, the opportunities you have had, the choices you have made, and take time to reflect on paths chosen, abandoned, taken up again:

A few questions to possibly focus on as spring blossoms.

A separate topic is how we judge the skill of those we encounter in the martial arts community. Students typically regard their teachers as skilled, otherwise they would not be training with them -- somewhat tautologically. Why I enjoy about the HEMA community is that while in general the direct historical linkage provided by Asian martial arts is not present, more detailed writings survive on the arts as taught in their time period, and with a great deal of effort, and a modern (almost open source) mindset, a high level of skill has been evoked in that community in a relatively short period of time. It makes me wonder what would happen in the koryu community if the different groups decided to regularly get together and fight one another.

MMA and Judo/BJJ are similar, where a strong emphasis is placed on shiai. It is a bit of a fallacy to think there can be no free practice in traditional martial arts, due to the dangers inherent in their practice. At the same time, we would want our practice to retain the character of what it is, instead of regressing to the mean in an attempt to win at a competition. But, where grappling is concerned, or sparring with swords is concerned, I think there is more the koryu community could do as a whole to keep their practices alive.

Some arts do this, but they are arduous, and do not attract many practitioners. People who excel at arts of good repute might quickly fail out of that kind of training evolution, once randomness and freedom are introduced. The familiar can become unfamiliar, and with freedom comes a proportionate amount of stress introduced into the practice. I am not sure each traditional martial art is capable of taking anyone interested on an intellectual level and bringing them to the correct mindset, without an external threat of conflict that would drive practice and an associated practice to allow the mind to stay focused and relaxed.

People have to have the right mindset in them, either instinctively, or through acculturation via specific methods of training. Hojo is one of those (and it is but one, particular to an art I practice). This is one reason why one might spend so much time on fundamental portions of a curriculum, before examining elaborations on a theme. In that regard, I feel that it is the smaller groups that often are stronger than those attracting many participants, as care must be taken to ensure a correct mindset is present, if what we are talking about is traditional swordsmanship. Often the basic practices of a tradition contain the hidden essence of the most profound, and when we see the full picture, after many years of study, we realize that what is seen is but the surface of a deep well of knowledge. Only by revisiting what we once thought we mastered can we begin to appreciate the full depths of our art.

Some thoughts as the days begin to shorten and threaten rain.